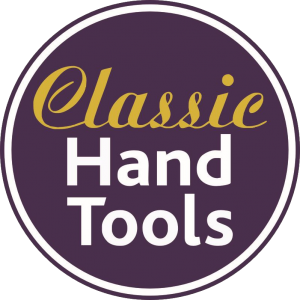 Simon Clements trained as a potter and came to carving via boatbuilding. He took a 2-year sabbatical at City and Guilds of London Art School to do a Postgraduate Diploma in Ornamental Woodcarving where he won the William Wheeler prize for the most outstanding carving of the year. He is currently a self-employed woodcarver, sculptor and private tutor. He considers himself a ‘maker’ rather than a theorist and over the years Simon has used a great variety of materials to create art works.

“I have always seen rotary cutting tools such as Arbortech and the like as invaluable tools for removing the waste wood on a carving and allowing the carver to get into the interesting bits quicker, though of course as you become adept at using these tools you naturally end up doing more detailed work with them. However, rotary tools had always seemed like a rather blunt instrument when compared to a carver’s gouge.” 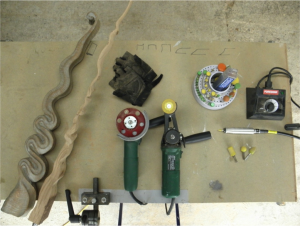 “So when I was asked to try out some of the Saburr Tooth rotary bits I began by making comparisons between the Saburr Tooth disk cutters and the Arbortech Turboplane fitted to a 4 inch angle grinder and cutting into Oak and Cedar of Lebanon. Both tools cut away huge amounts of material in a controllable manner leaving clean, shallow cuts rather like a 40mm number 2 or 3 gouge. The Turboplane produced “scalloped” cuts with small shavings in both materials and the Saburr Tooth disk created small, bead-like crumbs and a scratched surface texture. I kept my face mask on in any case but the large particle size does make clearing up easier.” 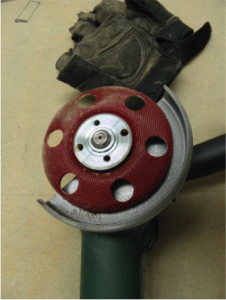 “I progressed to Saburr Tooth’s mini industrial cutting disk with a mini Arbortech attachment for the same 4 inch angle grinder. These angle grinder attachments are no longer available; consequently if you want to use any of the Arbortech or Saburr Tooth mini cutters you will need to buy the complete machine from the manufacturers. This, in my experience, is a good tool until you start using the machine for longer cutting sessions, when the motor housing/handle becomes rather hot. The Saburr Tooth disk sliced effortlessly as did the Arbortech, with the Saburr Tooth disk cutting marginally deeper and with a smaller kerf. Note that on the photographs my Arbortech attachment no longer has the standard plastic blade guard; the upright edge of the guard needs to be removed in order to use the current Saburr Tooth disk cutters.” 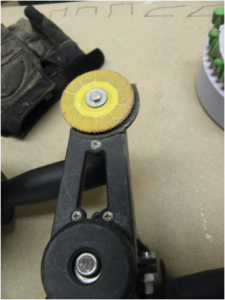 “As well as slotting with these cutters I use them to “draw” into the surface. Both tools do this admirably; using the cutters with a sideways motion I can model both internal and external curves. The Saburr Tooth disk cutter proved to be excellent for this, allowing for a more controlled sideways cut and the multiple cutting teeth created a more uniform surface with a reduced risk of the tool skipping.

I have a Foredom flexible drive unit on loan from Classic Hand Tools to try out the Saburr Tooth range of shanked rotary cutters. I asked for the Foredom on the recommendation of some fellow carvers who regard the machine as the best available.” 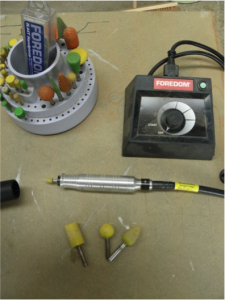 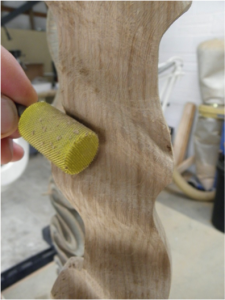 “These machines are new ground for me, and due to the scale of my carved pieces I have not used the very small rotary bits, instead concentrating on the ¼ inch shank tools. The photographs show the bits used and how they shape different profiles. Saburr Tooth bits are colour-coded, the yellow bits being medium cutters. The wood for these sculptures is old (pre WW2) reclaimed Oak and very hard, but the tools cut the timber easily and smoothly, leaving a fine, grinding pattern across the grain, and on the end grain they leave no marks at all. The Foredom performed very well, working at higher speeds to remove large surfaces and lightly on internal edges and curves. When applied with greater pressure the tooth marks also create a very interesting textured surface which is easy to direct and control.” 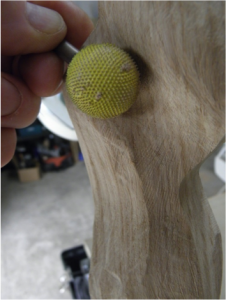 “I have been so impressed with the Saburr Tooth rotary carving bits that I am inspired to create a new group of sculptures using just these bits for all the surface modelling. They are much easier to use than mallets and gouges on hard wood like this and because of their speed, size and flexibility they allow the carver to work in a fast and intuitive way, and direct carving into the material like this is almost akin to drawing.

I have too much B.S.T. (blood, sweat, and tears) invested in my chisels and gouges to ever give them up, especially for softer woods such as Lime, but the Foredom flexible drive unit and Saburr Tooth rotary carving bits are now definitely an integral part of my working tool kit.” 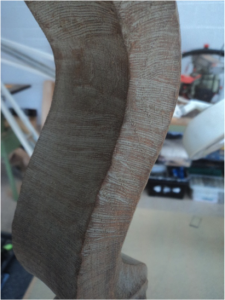 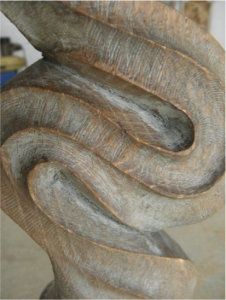 Sharp is a Gem of a Book